Solar panels are more efficient than ever, with consumer options now capable of converting up to 25 percent of the sunlight hitting cells into electricity. But those efficiency rates assume that the panels are pointed directly at the sun, which is rarely the case during its arcing trek across the sky.

The EcoFlow Solar Tracker solves this with a self-powered, motorized robotic arm that keeps your solar panels at a perfect 90-degree angle to the sun. Its sensor locks onto the sun automatically from dusk to dawn, causing the two-axis machine to lift and turn your solar panels in perfect harmony. This results in 30 percent more energy produced by your existing panels, according to EcoFlow.

Be warned, though: this chatty robot costs $3,399. It also isn’t nearly as portable as the company claims, and it got confused by clouds and reflections in my week of testing. 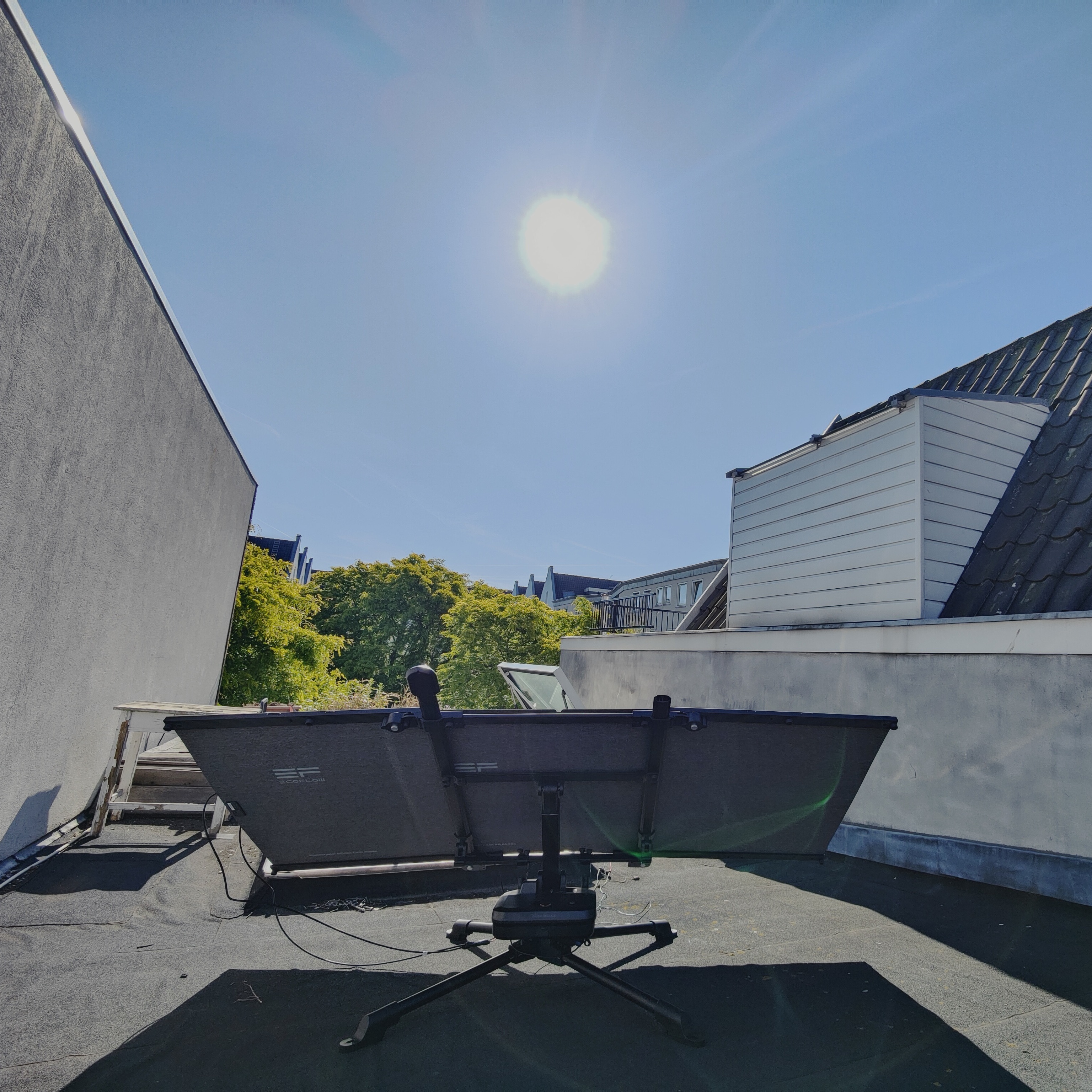 EcoFlow describes the Solar Robot as portable, saying it can be “collapsed, folded up and transported with ease.” It backs up the claim with a poorly photoshopped image on its product page of someone casually carrying the entire assembly in one hand — by the fingertips, no less. The image is a lie. 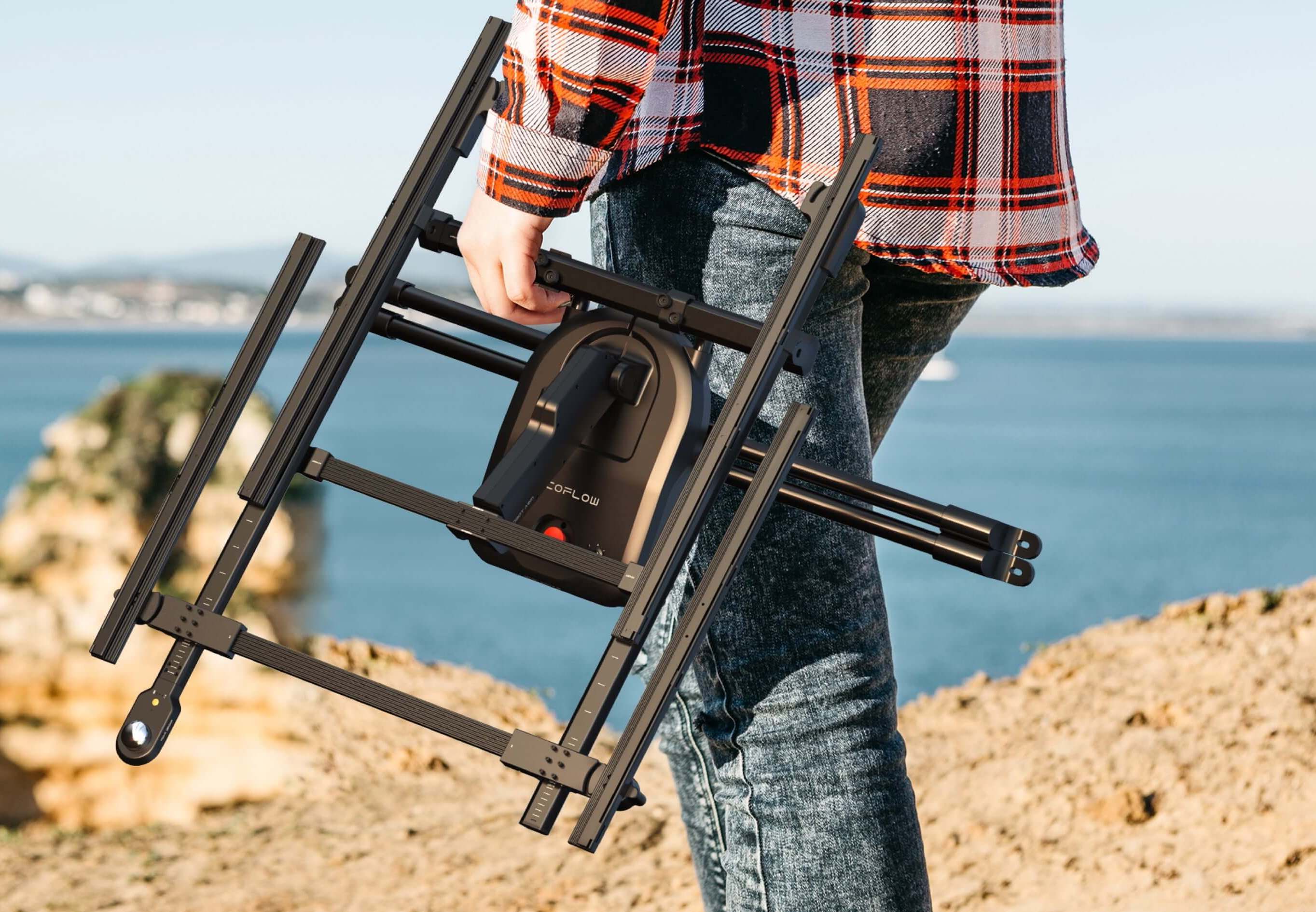 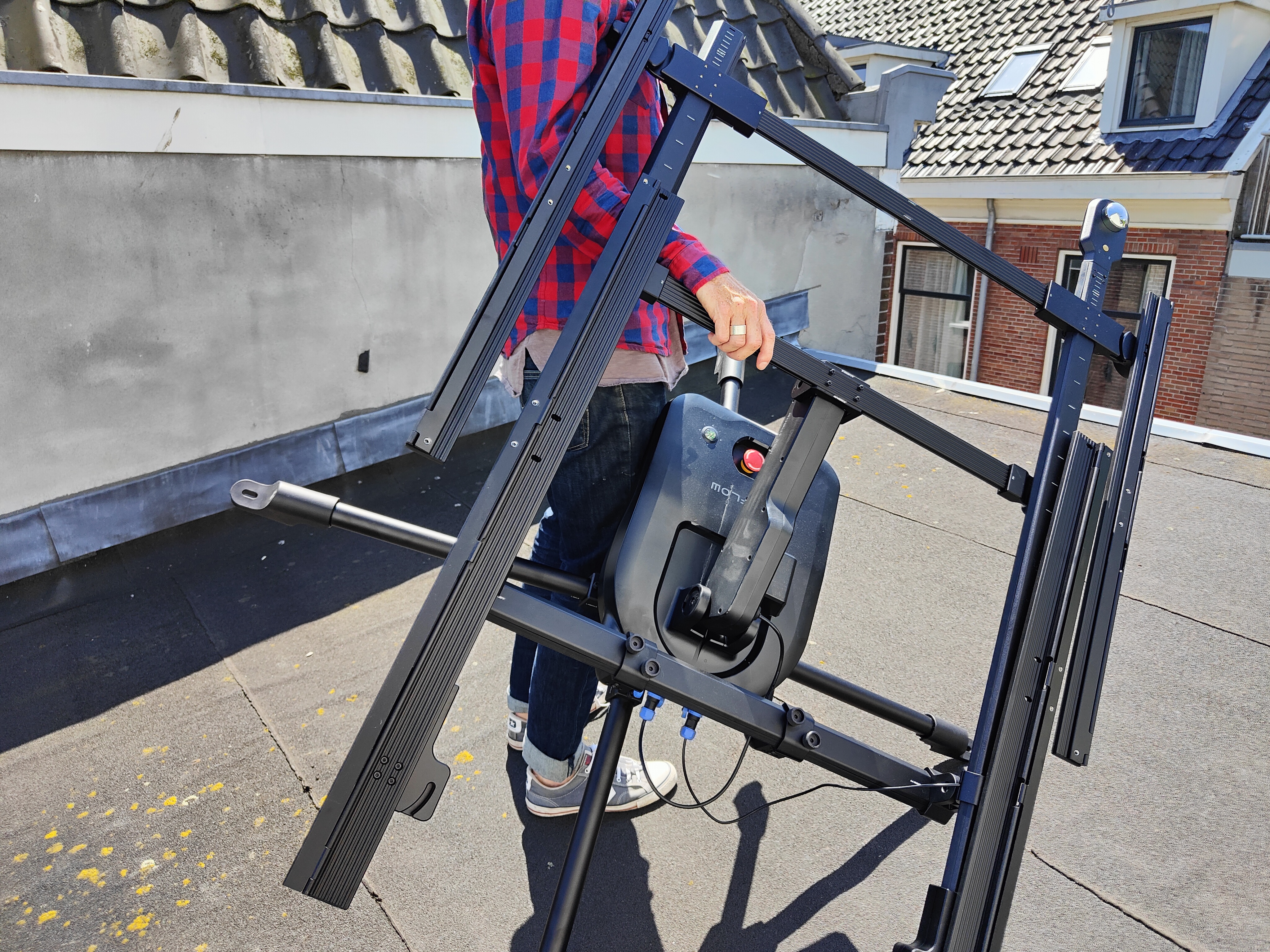 To start with, the Solar Tracker weighs 55 pounds (25kg) without the panels installed. That makes it a two-person job to move the unwieldy robot. And even with the panel arms folded down, it’s much larger than that image would have you believe, measuring about 25.5 x 56.5 x 40 inches (65 x 143 x 101cm).

It took me about 2.5 hours to fully assemble the Solar Tracker and adjust the arms to securely hold the EcoFlow solar panels provided by the company for testing. You’ll need to partly disassemble it into two pieces to safely transport the tracker up and down stairs or inside a car. Fortunately, separating the frame that holds the solar panels from the robotic arm can be accomplished in just a few minutes by unscrewing a handful of finger-friendly bolts. Still, the EcoFlow Solar Tracker is about as portable as a 65-inch television; sure, you can move it (carefully), but it’s not something you’ll want to do frequently.

My test setup was already pushing the definition of portability to the extreme. I used a 35.3 pound (16kg) 400W folding solar panel from EcoFlow that measures 42 x 94.1 x 1 inches (106.8 x 239 x 2.4cm) unfolded, or 42 x 24.4 x 1 inches (106.8 x 62 x 2.4 cm) when folded inside a carrying case that also serves as a kickstand. That giant monocrystalline silicon panel was then wired to the robot, which fed the collected power to a 100 pound (45kg) Delta Pro portable battery, EcoFlow’s top-of-the-line power station fitted with a telescoping luggage-like handle and wheels for easier transport. The $1,199 solar panel and $3,699 battery make for a serious power generator for people with serious off-grid power needs. Adding the $3,399 Solar Tracker to the mix makes the whole thing more permanent and efficient.

On sunny to mostly sunny days, the robot works great. The Solar Tracker springs to life just as soon as the rising sun hits the raised light sensor, causing the bot’s two-axis arm to swing the solar panel into the optimal angle to collect sunlight. This enabled the 400W panel I was using to produce between 310–330W of continuous power to the Delta Pro battery all day long without suffering the peaks and valleys of power you get from having to manually reposition portable panels every few hours. The robot did all the work, powered by an internal battery that’s kept charged by the solar panel.

On cloudless days, the Delta Pro’s 3.6kWh capacity battery was charging at a rate of about 10 percent per hour. The Solar Tracker fitted with the 400W panels can easily power a laptop, phone, portable fridge, fan, and Starlink internet with enough residual energy left over to keep the battery topped up at 100 percent to continue the party long after the sun sets.

The tracking’s not foolproof, however. Far from it.

Once I watched my test robot grapple with the sun reflecting off an aluminum strip that frames the building next door. It wasn’t until I shaded the sensor from the reflection with my shirt that it locked onto the large ball of burning plasma in the sky.

Clouds also proved to be an issue, as you can see in the timelapse below. The Solar Tracker woke up fine on this particularly sunny morning but lost its lock on the sun a few hours later after the clouds rolled in, causing the robot to beep incessantly to inform me it was in search mode. It did this repeatedly throughout the afternoon, beeping continuously. Weirdly, when the robot loses track of the sun, it doesn’t fall back to an estimated trajectory. Instead, it acts like the sun fell from the sky and needs to search the entire hemisphere to find it again, beeping all the while.


Watch as the clouds roll in and defeat the sun tracker causing the robot to hunt the entire sky.

One hunt I witnessed resulted in the tracker beeping nonstop for at least five minutes at a rate of one beep per second. That beeping proved to be such a nuisance over the course of the day that two neighbors rang my doorbell to complain. (Here in Amsterdam, air conditioning is extremely rare, and open windows are the norm.) I finally had to unplug the damn thing out of courtesy before resuming my testing a few days later after the cloudless skies returned.

The robot is programmed to beep continuously when powering on, powering off, searching for light, or returning to the starting position. I know it’s for safety, alerting anyone nearby that the monstrosity is moving. But this isn’t a five-ton delivery van backing up blindly, and you can already hear the motor anytime the slow-moving robot is active. Unfortunately, there’s no way to turn off the beeping either manually or via the EcoFlow app. Too bad because it makes the solar tracker unusable on my rooftop terrace, a place that could really benefit from a solar tracker and battery combo after I renovate it, thereby avoiding the time and cash required to wire the space with electricity.

EcoFlow says that it’s possible to add an option to control the audible alerts through a future firmware update. But if noise is a dealbreaker for you, then I wouldn’t bet $3,399 on a maybe.

As a concept, I’m completely sold on the Solar Tracker’s ability to optimize the conversion of sunlight striking solar panels into power. Despite EcoFlow’s claim of portability, its weight and unwieldy size make it best suited as a semi-permanent installation at a busy job site or remote cabin, for example. Any place where those chronic beeps won’t annoy your neighbors.

Solar charging anxiety for anyone going off-grid for a weekend or longer is as real as the range anxiety felt by EV owners. And having to constantly reposition portable panels towards the sun all day long to optimize charging is a tiresome harsher of the elusive mellow we all seek. A truly portable tracking robot that maximizes the efficiency of the portable panels used by space-starved van-lifers and weekend car campers would be most welcome. Unfortunately, the Solar Tracker isn’t that, despite EcoFlow’s claims.