The Samsung M8 Smart Monitor is one of those products that dazzle you with its abundance of features to overshadow the fact that most of them are gimmicks. But gimmicks aside, it’s a stylish 32-inch 4K monitor-slash-smart-TV for people who don’t have the space, money, or desire for two large, expensive displays. Plenty of people already use their monitors as TVs, and if you’re buying one big 4K HDR screen anyway, why not have it pull double duty?

The $699.99 M8 has a USB-C port with DisplayPort and 65W charging, so you can connect a laptop with a single cable and use that enormous screen to get work done. You can stream TV shows and movies from Apple TV Plus, HBO Max, Amazon Prime, Netflix, and many others on the built-in Tizen Smart TV interface. It has a rechargeable remote. It has Bluetooth and AirPlay (though no Google Cast). It has speakers and a microphone, a webcam, and even a SmartThings hub. You can make a Google Duo video call, edit Microsoft Office docs without a computer, or use your Samsung phone as a computer with DeX. Soon, you’ll even be able to play Xbox games on it without an Xbox.

The M8 isn’t great at everything it tries to do, and it only makes sense if you really do plan to use it as both a monitor and a TV. If you just want one or the other, there are better options for the money. But if you do need both and maybe one or two of the (many) other features, the low-profile, lighthearted design and kitchen-sink approach give the M8 a unique appeal. 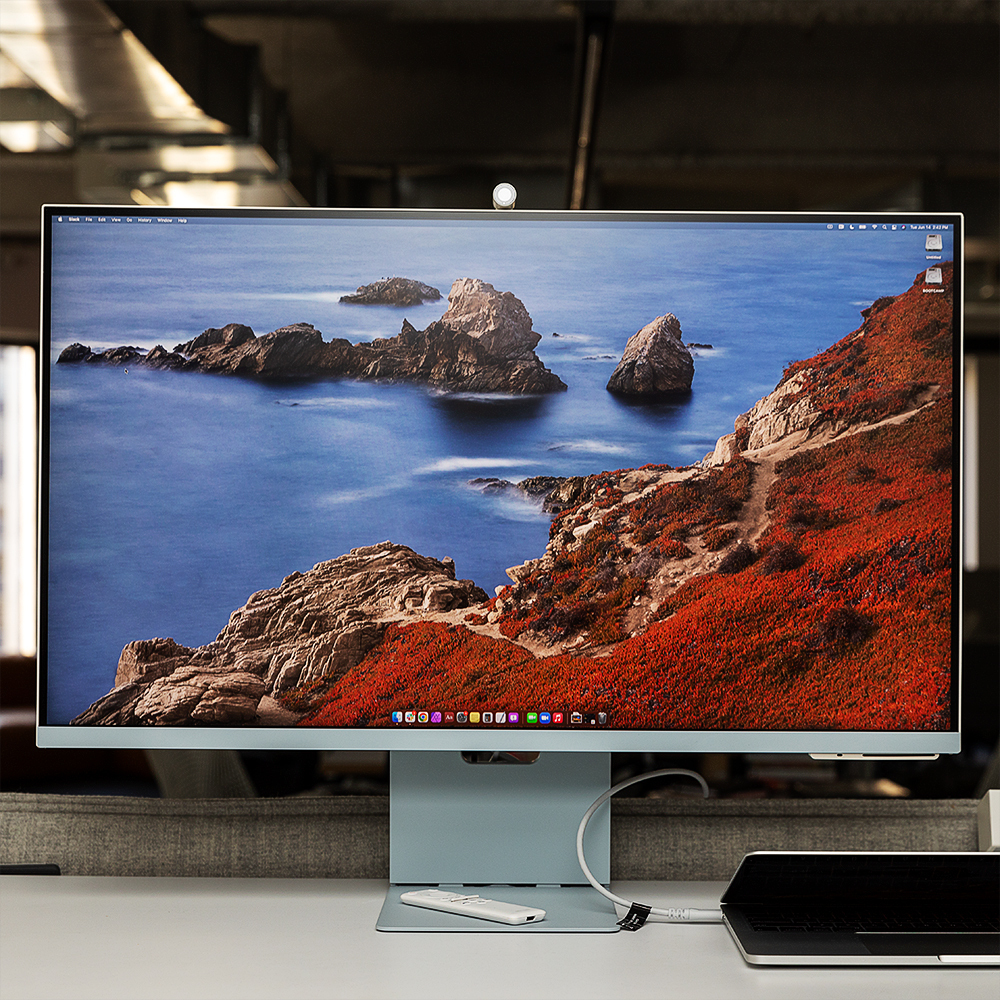 The M8 is a good monitor and a decent TV for less than it would cost to buy each separately, but outside of that, things start to get messy. The built-in stand isn’t very adjustable, and you can’t swap it out for a better one. Its detachable webcam has a clever design but mediocre image quality, and the Tizen interface is confusing to navigate. The browser it uses for loading web apps like Microsoft 365 is dreadfully slow, and it’s incompatible with Google Docs and Gmail. In its current state, it just isn’t ready to handle even a basic workload without having a machine attached to it. I’d love to see Samsung improve on these things in the next iteration.

Let’s zoom out for a moment. The Samsung M8 comes in four fun colors — green, pink, white, or blue — which appear on the monitor’s stand and front bezel (all models have a white rear casing). It’s thin, easy on the eyes, and surely owes some inspiration to Apple’s latest iMac design.

The M8 makes a good first impression, with its expansive 32-inch 4K display surrounded by thin bezels. It’s big enough to dominate a small desk. If you only stand (or sit) a couple of feet away from your monitor, like me, it may take a while to adapt to having so much screen real estate.

The VA LCD panel is a reasonable compromise for something that’s a monitor first and a TV second. It’s bright and vivid, with great contrast and detail. The all-white background of Google Docs looked white rather than gray. When I used MacOS Monterey in dark mode, the blacks, though not the perfect black of an OLED panel, weren’t washed out, at least when viewed head-on. Samsung claims that the M8 covers 99 percent of the sRGB color gamut (I measured 100 percent, actually, with a SpyderX Pro colorimeter), which is helpful for content creators, though the display isn’t factory calibrated.

At 400 nits of peak brightness (I measured 406), the M8 is more than bright enough as a monitor, though it picked up glare from windows and overhead lights and even reflected the white desk in our office. It also peaks at 400 nits in HDR mode (it supports HDR10 Plus), lacks local dimming, and its refresh rate caps out at 60Hz — more tallies in the monitor-first column.

Like other TVs and monitors with VA panels, the M8’s display washes out when viewed from an angle. That’s kind of what I expected, but don’t expect to entertain a room full of people unless they’re all crammed together on the couch (or bed, or futon — this 32-inch screen really does seem targeted at people in relatively tight quarters).

The M8’s ports are all around the back, beneath where its stand connects. There you’ll find two USB-C ports. One is USB-C 3.1 Gen 2 and can handle DP 1.4 video and data passthrough with 65W charging. The other is downstream, with USB 2.0 data speeds and up to 15W power delivery, perfect for charging its remote or a phone or connecting low-bandwidth peripherals like input devices. I had no problem connecting a keyboard or an external webcam. Plugging in a USB-C SSD worked, too (incredibly slowly — it took six minutes to transfer a 13GB file), but only if I removed the snap-on webcam first. There’s also a micro HDMI 2.0 port (a micro HDMI to HDMI cable is included) and a DC barrel input for power. It’d be great to have a full-sized HDMI port instead, as well as an Ethernet jack for better streaming quality and a couple more USB ports while we’re at it.

Now, let’s talk about the M8 as a TV. Tizen supports almost every streaming app that you can think of, and they’re easy to access with the bundled remote. Like Samsung’s TVs, the M8 supports HDR 10 Plus but not Dolby Vision HDR. As mentioned above, it also supports AirPlay 1.0, letting you beam content wirelessly from iOS and macOS devices or mirror your screen. The M8 offers similar wireless screen mirroring functionality for Windows computers and Samsung phones or tablets but omits Google Cast.

Its two built-in speakers work fine in a pinch. You can also connect one of Samsung’s Wi-Fi-enabled soundbars or pair a Bluetooth speaker or headphones if you’re okay with a little audio lag. You could pipe audio out over HDMI to a soundbar or receiver — the M8 supports HDMI-CEC, so you could use its remote to control the external device — but audio aficionados aren’t really the target audience for the M8. This convoluted audio situation could have been simplified with a headphone jack. Just saying.

One of the M8’s key selling points is that its snap-on webcam can be used to make Google Duo calls (and only Duo calls, for some reason) without a computer. Using Duo on the M8 feels like using a giant smart display, especially since it has face tracking and can automatically zoom in on your face (those webcam features don’t work when the M8 is connected to a computer, oddly enough).

Placing a call was easy enough, but as I’ve mentioned, the webcam’s quality leaves a lot to be desired. Not only are its tracking features more delayed and jittery than similar techniques on the iPad and the Google Nest Hub Max, but the video also looks pretty bad. Samsung claims that it offers 1920 x 1080 capture at 30 frames per second, but I always looked a little too dark and fuzzy in video calls, even in our brightly lit office space. My editor Nathan Edwards noted during a video call that “the M8’s camera was noticeably lower-resolution and had a much choppier frame rate than the MacBook Pro’s built-in camera.” During our Duo call, he noted that I sounded muffled and distant when speaking through the M8’s built-in microphone.

The webcam attaches magnetically to a set of pogo pins at the back of the monitor, which reduces cable clutter at the expense of adjustability. Both the webcam and the monitor stand have a limited forward-and-backward range of motion: when I used the monitor on my standing desk, I couldn’t tilt the screen far enough back to avoid neck pain and glare without relegating myself to a fraction of the webcam’s field of view.

The built-in webcam has other uses outside of video chats, but they’re more gimmicky. You can use it as a mirror of sorts to watch your form as you follow along with fitness videos on YouTube. Similar to Peloton’s Guide, Samsung Health can also watch and track your workouts through the camera, but I didn’t have a chance to fully test out that feature.

This TV-meets-monitor has some fairly robust smart home features, though they aren’t the main focus of the M8, so I didn’t spend time trying them out. You can enable Bixby, Google Assistant, or Amazon’s Alexa voice assistant and talk to them via the far-field microphone. It can also serve as a control center for SmartThings, letting it control Samsung’s smart home devices, as well as a huge array of third-party ecosystems and devices. It’s not as useful for local control as a standalone hub; you’ll need to buy this VG-STDB10A adapter to make the M8 compatible with your Zigbee products (it doesn’t support Z-Wave devices, sadly). The M8 also supports DeX, which lets you connect Samsung Galaxy S- and Note-series phones to get a desktop-like experience.

I touched on this earlier, but using the M8 as a stand-in computer just doesn’t work well enough to recommend trying, let alone relying on it if you’re on a deadline. Microsoft 365 is available as a web app on the M8 via Samsung’s Tizen browser, and it’s the most frustrating way I’ve encountered to type documents. It was always slow to load and slow to operate, and the typing indicator that shows where the cursor is on-page didn’t show up during testing. I feel like you’d get more computing grunt (and better compatibility) with a low-end Chromebook.

Putting all the extra features aside, the M8 is only worth considering if you want one screen to use as both a TV and a monitor. Even then, the obvious comparison is to Samsung’s own much cheaper M7, which lacks the M8’s good looks but does have the same USB-C and smart TV functionality — plus VESA support, two HDMI ports, two USB-A ports, and AirPlay 2. I haven’t tested it, but the spec sheet indicates a dimmer panel with a lower color depth and slower refresh rate, so it won’t look as nice.

If you aren’t interested in something that can pull double duty, you can get a comparable TV or a comparable monitor for less money. This 32-inch 4K monitor from LG for around $400, for example, rivals the M8’s monitor features. It has slightly lower peak brightness but balances it out with AMD FreeSync and more USB ports. And if you just want a TV, you can get a 50-inch TCL with local dimming for around the same price.

Or you might be tempted to step up to an OLED TV. If you do, you’ll reap several benefits, like unparalleled picture quality, higher refresh rate, and perfect blacks. But while they make great TVs, OLEDs have some inherent faults as monitors: my colleague Sean Hollister wrote in detail why OLEDs aren’t the wisest choice if you envision yourself working in productivity apps more than entertaining. The TL;DR is that they use a technique to drastically dim the OLED pixels to prevent burn-in, which gave him literal headaches.

The M8 isn’t the best monitor for the money, and it isn’t the best TV either. It’s not the best streaming box, video calling device, SmartThings hub, or really the best at anything for the money. But it’s a better monitor and a better TV than you could get if you only had $700 to buy both (or just $600, as the M8 has already been occasionally discounted to), and it takes up less room. Even the lousy computing experience and lackluster webcam don’t detract too much since you can just ignore them. But instead of leaving them out of the next iteration, I hope that Samsung improves on the features that didn’t turn out so well. Then, maybe using the M8 might feel a little more revolutionary.