Long before the introduction of the Apple Store, if you wanted to get your Mac fixed, you went to an independent repair shop like TekServe.

It was a different time — the ’90s, for one. But it was also a world where Apple wasn’t yet a commercial and cultural behemoth. Apple was a computer company that made incredibly specific products for a very specific kind of nerd — like the LaserWriter II, a much-loved, underappreciated printer that took us out of the dot-matrix era and into the next one.

Tamara Shopsin’s debut novel LaserWriter II is not about a printer but about the people who can fix it. They’re the squirrely bunch of enthusiasts who work at New York City’s TekServe. (Idiosyncratic seems like an understatement?) But as the book’s central character Claire learns, they are dedicated to their skills, and through them, we see an age when technology and its users were handled with care — and treated less like disposable objects.

Eventually, Steve Jobs would return to Apple to reshape it into what it is today. His first moves, among other things, involved totally shuttering the company’s printer division. And eventually, he’d create Apple’s own storefronts, which also did repairs, running indie shops like TekServe out of business (after carefully studying their methods).

But Shopsin’s novel lovingly captures the years before that happened. It’s a work of fiction but also a sharp, nostalgic slice of tech history. And so, we’re thrilled to excerpt it here. Enjoy!

In 1985, Apple produced their first laser printer, the LaserWriter (later known as LaserWriter I). Apple didn’t make the first consumer laser printer, they made the fourth, after IBM, Xerox, and HP. The LaserWriter used the same exact Canon engine as the HP LaserJet, but the LaserWriter was better. It featured new software that Jobs had invested 2.5 million dollars in called Adobe PostScript. PostScript was a wonder. It compressed images, shapes, and fonts into seeds that were sent to the LaserWriter, which then bloomed into razor-sharp type at any point size, perfect Bézier curves and halftones, all printed at blazing speed in an archival ink. The LaserWriter was the death of dot matrix and the birth of desktop publishing. It cost $6,995 and was worth every cent.

IJoel grabs an HP LaserJet from the shelf and puts it on the bench. “Don’t trust what the intake describes. Make sure you see the problem yourself,” Joel says, connecting the printer to the laptop on his bench.

The printer jams immediately, just as the SRO said it would. Joel points out the error lights. One is solid red, another flashes on and off with an amber glow.

Joel tells Claire she can decode the lights by checking three places. The first is HP’s technical manual. The second is message boards. And the last place is the best place. It is Tekserve’s own PRINTER FAQ.

Joel opens the FAQ and looks up the model of LaserJet. There, splayed out in plain spoke, spiked with tiny jokes, is all the ways a LaserJet ever broke.

Joel straps a purple bracelet around his wrist that has a coiled cord connected to the bench. Claire asks what it is for, and Joel explains that it grounds him, preventing him from making static electricity that might fry the circuit board. He says anytime you are near a machine’s insides you have to wear one. Claire hadn’t noticed it before, but now she can’t unsee that every Tek has a blue or purple bracelet on.

Joel starts to undress the printer, slipping its beige plastic off in a magic trick. Then he puts the case back on and shows Claire how he did it. Plastic tabs are bent slightly till they unlatch. Claire is warned that they are easy to break, and she shouldn’t push too hard or the whole case will need to be replaced. Joel goes deeper into the printer, warning Claire at every step. The screws are tiny and easy to lose. Wires must be tucked back neatly lest they block the paper’s path.

The problem is the gear assembly. This is a part that helps turn the rollers in rhythm to feed the paper through. A tooth has broken off.

Joel shows Claire where the parts are kept and what part numbers are and how to restock them, and everything is signed with initials and everything requires knowing the thing before.

The gear assembly looks like a Spirograph set. Joel unscrews it and hands it to Claire to inspect. She caresses the part, spinning its dysfunctional gears. Claire asks if the broken part gets recycled. When Joel answers that it will go in the trash, she asks if she can keep it. Joel laughs and says of course she can.

After the gear assembly is replaced, Joel replaces the LaserJet’s fan. The PRINTER FAQ told him to do this because the fan (much like capitalism) has a design flaw that makes it eventually fail, and as long as you are all the way deep in the printer you should replace it. The FAQ also says if the fan is the thing that fails, you should preemptively replace the gear assembly because one of its gears is prone to having teeth break off.

Joel says the worst thing on earth is to fix a printer and have it come back within the year broken again. Claire feels this truth in her bones.

The LaserJet is put back together, and a hundred test pages are printed. The hundred pages are made of a waterfall of type that espouses Tekserve’s core values:

Claire asks if it isn’t a waste of toner to print so many pages? Joel reminds her of the worst thing on earth.

Gary comes back from lunch surprised. No one told him Claire was training. His round face twists up so gnarly that his beard can’t even hide it. The twisting stops and lands on a toothy smile. He extends his hand to Claire and says, “Welcome to the printer bench.” Gary keeps talking—it is a flood of things, tips about the phone system, tips about solenoids and pick-up rollers. None of it makes sense to Claire.

Joel asks Gary if he can handle the phones for the afternoon while Claire is being trained. Gary says, “On it, chief.” And on cue, the phone rings. Gary goes to his bench and picks up the call.

calls,” Joel says, and tells Claire he will teach her that tomorrow. Then his voice drops to below a whisper, and he says, “Don’t listen to Gary about printers.” He says it so fast and low, Claire wonders if she imagined it.

“The paper tray sticks like a mofo. The owner says the printer prints great, but the drawer is driving her totally nuts. Can you take a look at it now? If you can’t, just tell me what I should quote for?” Chaz adds the last part as protocol. Joel already has hands on the plastic latch of the drawer.

A shrill scraping squeal sounds as Joel yanks it open.

Joel grabs a silver tube from his bench and shows Claire how to grease the track of the tray. He slides the tray in and out, distributing the grease till it glides silently with ease.

“It’s a no-charge repair. Tek doesn’t sell silicone grease, but the customer should try to buy some because the squeaking might come back in a few months,” Joel says to Chaz, and adds, “Have you met Claire? She’s the new printer Tek.”

Claire turns red and gives a little wave, which is less a wave than an easy way to get her hand to her forehead to cover her eyes.

Joel explains that the LaserWriter II was discontinued almost ten years ago. But Tek always encourages people to fix them. Always. LaserWriter IIs are tanks, one of the most solid printers Apple ever made. The printer has only one design flaw, one thing that consistently breaks, and that flaw takes ten years to surface. Joel pauses for breath. Claire is on the edge of her seat.

He concludes, “The fan blades warp a little over time and suck in dust. This dust eventually gets into the optics and causes pages to ghost.”

Claire prints a test page from the LaserWriter II. The edges of the paper are bright white. They stipple to a black stripe of text in the center, in a kind of reverse ice cream sandwich.

Ghosting is a term used to cover a host of printing problems—double images, an image seen through the backside of the paper. Here Joel uses “ghost” to describe printing so faint it has not actually printed.

“I hate this repair. You have to take the whole thing apart. Vacuum and wipe the dust all the way bloody down,” Joel says, pulling out a tan vacuum with a trolley of attachments and a long hose.

It takes Joel and Claire almost an hour to get to the heart of the printer, which is held inside a black plastic box covered in lightning bolts and exclamation marks. The case houses the laser and its partners, a rotating octagon and a flat rod-shaped mirror that the laser spends its life bouncing off of.

Joel gently unseats the mirror rod and shows Claire the dust, which cakes the mirror’s ends. It is in exactly the pattern of the test print. He warns her about smudging and the sanctity of the black case. With a clean chamois, Joel carefully rubs a cleaner along the mirror till it sparkles. Then he tells Claire to replace the printer’s lower fan, put it all back together, and print a hundred pages.

There is nothing on this earth Claire would rather do.

It is her favorite repair so far. After the hundred pages are printed, Claire calls the customer and tells him his printer is ready for pickup. 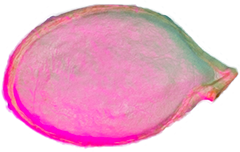 LaserWriter II will be available on October 19th wherever you buy books.